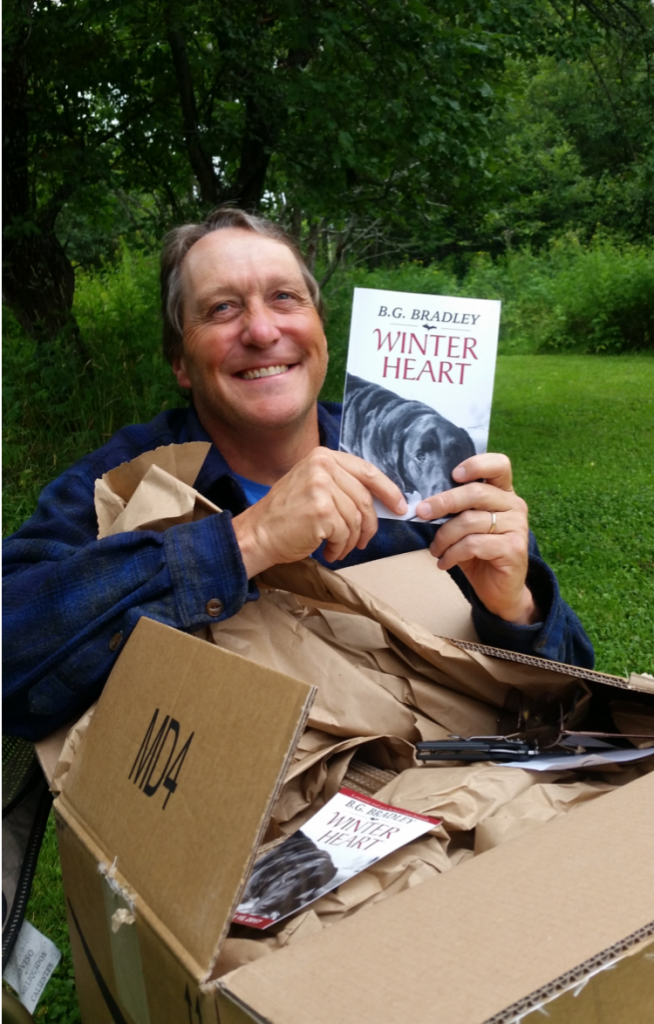 His plays have appeared on local stages including the Lake Superior Theatre which in 2010 produced his Lake Stories, a prequel to this novel, which he wrote, directed, and starred in as Ben O’Brian opposite NMU’s Dr. Shelley Russell as Grace.

Bradley lives in Diorite with the love of his life, Debbie, and his labrador, Tom. His sons Taggart and Patrick are actors and arts activists on their own.

An Interview with B.G. Bradley 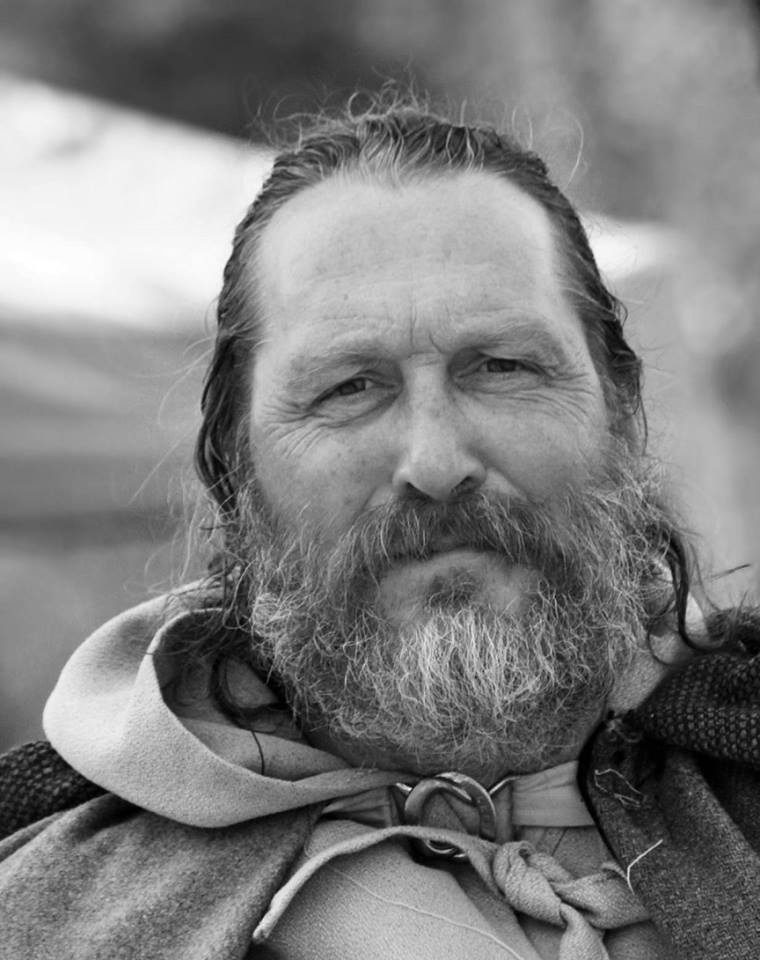 MD: – Thank you for taking the time to talk with me today.

M.D. – Let’s talk about the Hunter Lake series of books. You’re recently released novel Winter Heart is the first in a series of books set in this fictional community. Please tell us a little about the series.

B.G.B. – Well, originally they were simply going to be about a late-middle-aged widower poet and retired college professor taking walks on a frozen lake in the U.P. But then his pesky sister just kind of walked in through the cabin door and the stories took off.

Then I realized there must be even more family. The main character, Ben O’Brian, had to have a past and an extended family and friends…a whole community. At this point the books concern a great many of those characters who live in the Hunter area. It’s small town life in the north with all that entails, including history, which is another character really… and the incursion of modern life and the future with all that entails.

M.D. – And it all takes place in the same location?

B.G.B. – Yes, with only a few side trips, the events all take place on Hunter Lake, in the nearby village of Hunter, and on the Gros Rocher River.

M.D. – Is this a linear series or are they stand alone stories that can be read out of order?

B.G.B. – The first two books and at least two of the later ones, definitely stand alone. The others could be read on their own, but are probably better read in connection with the full series so that all the nuance comes through.

M.D. – Do you have the whole series mapped out, already?

B.G.B. – Yes! At this point Summer Rounds, the second book, is nearing completion, and a number other books are in first draft form.

M.D. – How many books will there ultimately be in the series?

M.D. – Will they focus on the same characters throughout?

B.G.B. – Some of the characters appear in nearly all of the books, but there are whole novellas that focus on all different characters. I enjoy getting into the heads of different sorts of people and play with points-of-view and there’s a pretty good variety of narrative styles in the books.

M.D. – What was your inspiration for Hunter?

B.G.B. – There were many inspirations. I grew up in the U.P., in the town of Newberry. I spent many summers and hunting seasons on the shores of a nearby lake, and in various tiny bergs all over the U.P. I think all of those places play a role in the inspiration. I also attended a tiny private college in Lower Michigan, and Hunter is a little college town in the novels. That, without question, figured in the fictional creation, as well.

That being said, none of the characters or locales are truly based on any one person or place. In other words, it’s fiction, and my imagination roams freely throughout it inventing interesting little foibles and qualities for characters, and landscapes of the mind.

M.D. – Please tell us a little bit more about yourself. What is your professional background?

B.G.B. – I spent ten years as a journalist, beginning at age nineteen. I worked for a number of newspapers all over the Upper Peninsula. For twenty years I was a columnist for two or three U.P. papers. During many of those years I was also a high school English teacher, a stage actor, and a theatre director. I’ve also done some voice-over work. After retiring from the high school, I became an adjunct professor of English at Northern Michigan University.

M.D. – I understand that before the novel Winter Heart, there was actually a play based around the characters in that book. Can you tell us more about that?

B.G.B. – Yes! The play was called Lake Stories and had the identical location and characters. It was presented at Lake Superior Theatre in Marquette in 2010. We did lots of improv with local actors and that work helped to create many of the characterizations which now appear in the book. Though I had some pretty solid ideas about them before we ever started. Where those ideas come from, I’m not always certain. Some of the sources for characters, to be honest, are a little mysterious, even to me. I had the opportunity to play Ben O’Brian in the play opposite Dr. Shelley Russell, from the theatre department at Northern Michigan University, as Grace. That was a great experience, as I have known Shelly for the better part of 30 years and we had a great rapport going in, not to mention that she’s a marvelous actress. Monica Nordeen, Rob Shirlin, Timmy Grams, and Shannon Miller rounded out the cast, and they all did wonderful work. Ha! Even my dog, Huck, whose image appears on the cover of Winter Heart, got into the act, playing himself. It was great experience. Important, I think. The play showed Yoopers, as something more than folks with interesting accents, who ice fish.

M.D. – Wow, so the character of Ben is really close to your heart. Is it safe to say that he is the character you most relate to?

B.G.B. – Yes, though in working with editors on these books, who include, of course, yourself, Lindsay Brindley, my sister Beth Bennett, and Monica Nordeen, it’s been pointed out to me that some of the other characters share some of my personal traits, which I suppose is unavoidable. Though, outside Ben, the revelations about the other characters’ traits resembling me, came as total surprises. I guess we don’t always recognize ourselves. That may be a good thing. Ha, I’m not sure.

M.D. – Please excuse this next question if it’s too personal, but in Winter Heart, the character of Ben is dealing with the loss of his wife. You write so succinctly about loss and healing… but your wife, Debbie, is very much alive and well. How did this come to be such a theme for the story?

B.G.B. – First let me just say, thank God for Debbie! She is the love of my life and my rock and has been for over thirty years. So, your question is a great one, but I’m afraid I only have nebulous answers. I lost my father when I was fourteen, and so, perhaps it was only natural that having dealt with such a devastating loss so early in my life, that death, dying, and healing, became an integral part of my personality and thus my writing from an early age.

I’ve suffered other losses in my life as well, and these, I suppose have reinforced, that urge to contemplate and write about these darker matters. Sometimes, too, a loss of love, or a disappearance of someone from your life under very ordinary circumstances can be traumatic too, but in a more subtle, even insidious way. It can sneak up on you.

All these, I think combine to create some of the dark themes in the book. But Winter Heart is not really about dying. It’s about living. It’s about the belief that even when things really go south and you’re left in a lonely place, there is a way through. If you have a little faith, and are lucky enough to receive some gifts of grace, as most of us are if we’ll only look around, we pull through and all will be well…joyful even!

M.D. – Let’s talk about your next book, Summer Rounds. What is this one about?

B.G.B. – The book is told through the viewpoint of Dale Sylvanus and concerns his efforts at redemption. He starts the story sleeping in a boat house, after going on a Saturday night drinking binge. Gradually, the really good folks around him, and Dale is a great fellow too, just a trifle confused…okay…very confused about his priorities in life…anyway, the really good folks around him including his wife and kids, and a village priest, attempt to pull himself back up and get back in the game.

B.G.B. – Yes. The one who rescues Ben from his…uh…furnace troubles.

M.D. – Does anyone else show up from Winter Heart?

M.D. – Will this one be structured the same way, with multiple perspectives and poetry interspersed throughout?

B.G.B. – Interestingly, no, though some of the later books use that somewhat experimental style. This is conventional first person, from Dale’s point of view, using Dale’s type of language. It’s folksier, more elemental, and yet takes on some questions about modern life in America, in addition to describing life in a small town.

M.D. – You’ve really done some extensive world-building here. Will you be looking to do any non-Hunter related projects in the future?

B.G.B. – Yes, I have a few science fiction books in the works.

M.D. – Science-Fiction! That’s a departure. Is that genre a major influence for you as well? How about comic books?

B.G.B. – Yes to both. I was a comic book nut growing up, especially the Marvel titles. I used to go down to my local drug store and buy the whole line each month. Of course, that’s when the most expensive ones were twenty-five cents. In science fiction, I was an Arthur C. Clarke fanatic! I read everything he wrote as fast as I could get my hands on it. He’s a huge influence.

M.D. – You’ve planned out nine books for the Hunter series and more than one science fiction project. You’ve been quite busy! When you’re not writing, what sorts of things are you doing?

B.G.B. – I spend a lot of time in the woods, canoeing, cross country skiing, duck hunting. It gives me peace, solace, and just out and out happiness. I love to watch a sunrise in the woods or over water, alone or with friends and family. There’s just something about those beginnings that bring constant hope. We’re going to be okay.

M.D. – Is writing a part of your everyday life?

B.G.B. – Yes, and it has been since I was in my very early teens and even a bit before that. These days I rise at about 4 a.m. and spend up to four or five hours writing. I love it. More than that, it grounds me and gives purpose to everything else I do. T.S. Eliot wrote, “How do I know what I think until I see what I say.” He’s exactly right. If I can write it down, I can usually make sense of it. Ha, sometimes even the craziest things!

M.D. – And the poetry which is such an integral part of Winter Heart. Are there any plans for collections of just your poetry?

B.G.B. – Yes, my editor, Lindsay, in particular has been pushing for that and at some point it’s going to happen. I write a poem a day. Not always a good poem a day, but I always get one in, ha!

M.D. – That’ll be delightful! Congratulations on your success with Winter Heart and best of luck as you continue your journey!

B.G. Bradley has lived in Michigan’s Upper Peninsula his entire life.  He has authored a series of books set in the northern part of the state and will soon be publishing a book of poetry, which includes a poem for every day of the year.  He spoke with WEMU’s Lisa Barry about his writing and the inspiration he gathers living in the northern part of the state with its rough weather and natural beauty.

Listen to the whole interview below: